Home ➜ Formulas ➜ How to COUNT Words in Excel

There is one option which I always wish Excel should have and that's count number of words from a cell.

If you work in MS Word there is an inbuilt option on the status bar which shows you how many words are there in the sheet.

But when it comes to Excel there is no such option to count words. You can count the number of cells which have text but not actual words in them.

As you know, in Excel, we have functions and you can use them to calculate almost everything. You can create a formula that can count words from a cell.

Now without any ado, let's get started.

1. The Formula to Count Words from a Cell

To count words from a cell you need to combine LEN function with SUBSTITUTE function. And the formula will be (Text is in cell A1):

When you refer to a cell using this formula, it will return 7 in the result. And yes, you have a total of 7 words in the cell.

Before getting into this formula just think this way. In a normal sentence if you have eight words then you will definitely have 7 spaces in those words.

That means you will always have one word more than the spaces. The idea is simple: If you want to count the words, count the spaces and add one in it. Now, to understand this formula you need to split it into three parts.

In the first part, you have used LEN function to count the numbers of characters from the cell A1.

And in the second and third part, you have combined SUBSTITUTE with LEN to remove spaces from the cell and then count the characters.

At this point, you have an equation like this.

And when you subtract both of these numbers gets the number of spaces and in the end, you have to add one in it. It returns 7 in the result which is the total number of words in the cell.

When you use the above formula it will return 1 even if the cell is blank so it’s better to wrap it with IF function to avoid this problem.

This formula will first check the cell and only return word count if there is a value in the cell.

Apart from the above formulas, I have written a small code to create a UDF for this. This code will help you to create a custom function which will simply return the word count.

In short, you don’t need to combine any functions.

Function MyWordCount(rng As Range) As Integer

Let me tell you how to use it.

And, it will return the word count.

2. Count Words from a Range of Cells

Now let’s come to the next level.

And here you need to count words from a range of cells instead of a single cell.

The good news is you just need to use the same formula (just a simple change) which you have used above.

And the formula will be: 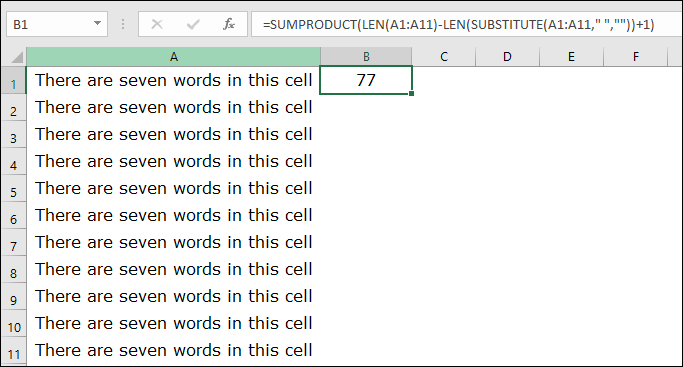 In the above formula, A1:A11 is the range of cells and when you enter the formula it returns 77 in the result.

here's how it works

This formula works in the same way as the first method works but just a small advanced. The only difference is you have wrapped it in SUMPRODUCT and refer to the entire range instead of a single cell.

Do you remember that SUMPRODUCT can take arrays? So when you use it, it returns an array where you have a count of words for each cell.

And in the end, it sums those counts and tells you the count of words in the column.

This code is one of my useful macro codes list which I use in my work and it can help you to count all the words from a worksheet.

For Each rng In ActiveSheet.UsedRange.Cells

When you run it, it will show a message box with the number of words you have in the active worksheet.

4. Count a Specific Word/Text String from a Range

Here you have a different situation.

Let’s say you need to count a specific word from a range of cells or to check the number of times a value appears in a column.

Below you have a range of four cells and from this range, you need to count the count of occurrence of the word “Monday”. For this, the formula is:

And when you enter it, it returns the count of word “Monday”.

Monday is there four times in three cells.

...let me explain how it works

To understand this function, again you need to split it into four parts.

In the first part, LEN function returns an array of the count of characters from the cells.

The second part returns an array of the count of character from the cells by removing the word “Monday”.

In the third part, LEN function returns the length of characters of wor word “Monday”.

After that, subtracts part one from part two and then divide it with part three...

...it returns an array with the count of the word “Monday” from each cell.

In the fourth part, SUMPRODUCT returns the sum of this array and give the count of “Monday” from the range.

Download this sample file from here to learn more.

Whenever you are typing some text in a cell or a range of cells you can these methods to keep a check on the word count.

I wish someday in future Excel will get this option to count words. But, for the time being, you have all these awesome methods.

Make sure to share your views with me in the comment section, I'd love to hear from you. And please, don’t forget to share this post with your friends, I am sure they will appreciate it.

You must read this next